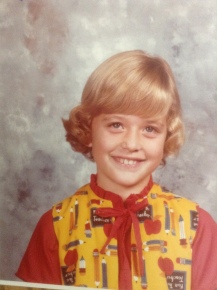 As September rolls around and we ebb closer to Fall, I’m reminded of those last anxious days of summer growing up in Florida. I keenly felt the loss of freedom and abandon which the summer break always seemed to grant. We neighborhood kids would divide our time between catching tad poles in the ditches after a heavy rain, hunting for catfish in Philippi Creek, riding the waves of Siesta Key Beach and making sand castles from the bright white sand that is the consistency of powdered sugar and has made Sarasota legendary. But as I got older and the summer receded and the school year drew near, a bloom of dread and fear would inevitably blossom as I prepared for the unknown.
I remember the first day of kindergarten when I was equal parts scared and thrilled. I was starting the next chapter of my evolution and had been excited about my step toward adulthood until I’d met my teacher. My Mom and I went to the “Meet Your Teacher Night” at school the week before the year officially began and was so excited to walk down the halls in which my older brother once roamed. I’d gone to a few of his school Open Houses and was always left feeling rather jealous of his maturity and sauve wa faire as he seemed to take everything in stride like he’d done 5th grade a hundred times and was waiting for a real challenge.
Now it was my turn. I still remember walking the halls after a thunderstorm and breathing in the smell of rain and something else that seemed very collegiate like musty books, chalk, and freshly mowed grass. I wore one of my favorite outfits to thoroughly impress my teacher. It was a very chic ensemble of my own creation which involved sweat bands and my favorite purple unicorn t-shirt. Don’t be jealous.
As we searched the halls for the right room number, I began to get more excited with each new step towards my new classroom. Even the word classroom felt so adult that I found clever ways to slip it in to sentences that night at dinner. “Dad, tonight we are going to my new classroom and meet my teacher.” “I wonder what desk I will be assigned in my classroom.” “Will I be able to write on the chalkboard in my classroom?” You see where this is going? Frightfully annoying, but I couldn’t help myself such was my joy at being a new student. I felt as though there might actually be a balloon in my chest which threatened to burst from the excitement of it all. Unfortunately, we did find the class and the bubble did burst upon seeing my kindergarten teacher; a fearsome creature; tall and thin with a stern countenance, a sharp nose, and a menacing glint in her eye. Her eyebrows were elaborately painted on in a way that always made her appear as though she was in a perpetual state of surprise. In truth, I don’t think much surprised my formidable teacher accept perhaps the question that surely plagued her sleep,

“What happened to my life and how did I end up teaching children?”

Her name was Ms. Dean. She was the first Ms. I’d ever met. What did it mean I wondered? I was forced to sort out the Mrs./Miss. conundrum in Sunday School, but this new hybrid was a mystery. Sadly, I went the whole year without ever getting to the bottom of the whole Ms./ Mrs./ Miss. dilemma but it definitely added to her intrigue.
I came home from the Open House with an uneasy feeling in the pit of my stomach, (a feeling I would become very familiar with unfortunately) and went straight to bed. I waited with trepidation as Monday loomed in front of me like storm clouds on the beach, thus ruining any chance of enjoying those last few fleeting days of summer.
In an attempt to cheer me up, my folks took me to the store and let me choose my first pencil box, pencils, lined paper, a Holly Hobby lunchbox and a book bag! Momentous! To this day I still get excited about school supplies and can almost feel the childhood anticipatory dread/glee when passing a pyramid of that wonderfully ineffective but delicious smelling Elmer’s school paste in the jar with its useless built in stick.

I’m reminded of Tom Hanks and Meg Ryan in “You’ve Got Mail” where the protagonist declares, “Don’t you just love Fall? It makes me want to buy school supplies and send you a bouquet of newly sharpened pencils.”
This trick of buying accessories to improve my mood and general outlook on life has never failed to lift my spirits. I was beginning to feel a little bit better about this scary new chapter, I mean my first day of school had yet to begin, and I had already learned something I would use for the rest of my life; Accessory = Happy…unlike for instance Algebra which I still have yet to use… Come to think of it Algebra did teach me a few valuable lessons, like learning how to feel humility, recognizing the pang of dwindling self-esteem, and the sickening sensation of failure.
My Mom made my outfit for my first day of school. The ensemble consisted of a red shirt with a little tie and a yellow corduroy vest with images of the alphabet, red apples, and pencils dancing higgeldy piggeleldy across the fabric. In retrospect, corduroy in Florida during the month of Sept. might have been a mistake, but I was stunning in my one of a kind ensemble with my overly curly hair refusing to be tamed and my tremendously bony knees peeking out from underneath a simple skirt. At five years old my knees protruded in alarming angles- think baseballs meet toothpicks. By second grade I was taller than every person in my classroom…including my teacher… I used to have nightmares where villagers would chase me with torches and pitch forks yelling, “Freak!”
Monday finally rolled around and despite my misgivings, I arrived on that first day of school pencil box in hand, my head held high and butterflies in my stomach. The school year began whether I was ready or not and to tell you the truth I did not enjoy kindergarten and Ms. Dean never warmed up like I had hoped. So often in the TV shows I watched growing up, the crotchety Mr. or Ms. So and So ended up being kindly and loyal once you broke down their icy façade. No, Ms. Dean was like so many of us; tired and confused as to how she’d arrived at her current career. She did leave me with one nugget of wisdom which I have remembered to this day. When drawing/painting an animal or family scene, never draw an obvious line between the sky being blue and the grass being green, I can still here her critique, “Your otter looks like its falling off a cliff. Is that what you were aiming for?…No?…I didn’t think so.” And then with a bone weary sigh Ms. Dean intoned, “Do it again.”
After that first year of school I felt the sweet release of summer and by the time first grade rolled around I was ready. Gone was the school girl naiveté, (Imagine slicked back hair a pack of candy cigs rolled up in my white t-shirt and scuffed boots.) My innocent excitement of kindergarten was a distant memory. I had my beat up school bag and my Holly Hobby lunch box which I had accidentally left on the stove so now had cylindrical burn marks across Holly’s cherubic face. Rather fitting I thought as I strode into my new classroom bracing for the worst.
Alas, First grade was a breath of fresh air. My teacher Miss. Leroy was lovely. She wore long flowy skirts and peasant blouses with soft curly hair. She never wore makeup and was prone to wearing Birkenstocks. I thought she was beautiful. We all did. She had a wonderful open spirit about her and always smiled and laughed with us over a silly joke or song. Miss. Leroy made me feel like I could do anything. It’s truly amazing what a difference a teacher can have in your life. I woke up excited to go to school and was surrounded with a creative, effusive environment where we all felt safe and loved. Speaking of love, I met my first boyfriend Peter that year and we promised our eternal love and devotion to each other after his birthday party on the Philippi Creek Bridge. He lives in New York now and seems to live a rather fabulous life or so I’ve intimated via Facebook. He said he knew I was his girl when one day as we were playing on the jungle gym I did a penny drop off the high bar. Aw amour…
Every school year was like that, some were filled with people you loved and added value to your life while others were something you just had to endure and survive. In that way school is the master class of life because the rhythm never really changes. I wish someone would’ve told me back then,

“Sundi, this is life. Some years will be great, some won’t. The only choices we have are how we choose to deal with these moments of stress or joy, the rest is out of our hands. We only get one life so decide how you want to live it…”

Or something like that…I used to think life started once I was out of school, now I see that those moments in school prepared me for how I dealt with everything that followed. Thanks to Ms. Dean I learned; not everyone will be a fan of my work or personality. Thanks to Miss. Leroy, I learned giving and receiving love is the best way to live my life. Both are invaluable lessons and I wouldn’t be the same person without their influence. The only choice I now have is which person I wish to be remembered as; a Ms. Dean or Miss. Leroy…

I will now close with these golden rules I wish someone would’ve laminated and passed out during a school assembly:
10 Rules of Classroom Wisdom

Originally published in The PineStraw Magazine 2013